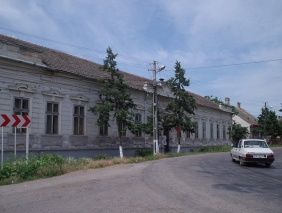 It has been a while since there was news of the activities of the Warmte voor de Kinder Foundation. Which is not to say that no activities took place, on the contrary!

At the beginning of this year, new plans were made for a new project. About 2,500 people live in a small village in Romania, Sinandrei and there is a primary school from about 1900. At this primary school, children from all over the region attend education. It is a large school with 25 classrooms and a separate gym. The last 50 (!) Years there has been little or no maintenance at this school. The windows are partly broken and do not close properly. There is a form of heating that consists of homemade pot heaters or the tile heaters that we know so well from previous projects. Everything is fired on wood, which leads to bad smells in the classroom in winter and, due to the bad condition, insufficient heat in the classes. Instead of doing a school project in Timisoara, the board of the Foundation chose this school because this school offers education to the village of Sinandrei and other villages in the area and because the local government cooperated and was very closely involved in this project , of course also in their own interest!

After requesting various offers, an installer was finally selected and a budget was drawn up. A transmission calculation had to be made. Rentema, a consultancy firm from Didam, made this completely free of charge! On this basis, a material list could be made which was made available to the installer. After consultation, it was decided to make an installation with 7 central heating boilers and a boiler for the hot water supply of the showers in the gym. The boilers were planned in 2 cascade groups of three boilers for the main building, the gym was equipped with a separate boiler and a boiler. The central heating boilers and boiler have been donated by Viessmann! This boiler manufacturer donates a considerable amount to charities every year and when they heard that Viessmann boilers would come in, they spontaneously agreed to donate them! A wonderful gift of course!

During the school holidays, the installation started and the installation was finished at the end of September. The installation was officially put into use on October 8, 2005. The undersigned of the foundation's board and the secretary - mr. Frans Geurts - present to attend this official commissioning. As usual, this was accompanied by speeches and acknowledgments. Many children were present. The citizen father himself was there as well as the whole city council, the school board and even representatives of local political parties (winning souls?) Anyway, the mayor told in his speech how he felt ashamed that for 50 years nothing had been done about “his” school. He then made the decision to replace all windows of the school with plastic windows with double glazing and to renovate the floors of different rooms. What we had seen before; our initiative led to a total renovation of the school! After all formalities, we were invited to a buffet with all invited guests and traditional Romanian folklore dancers and music.

In 2003, for the 50th anniversary of Rensa, we provided a school with heating in a gypsy village 70 km east of Timisoara. Because we were curious how it was now, we also went there. What turned out? The central heating installation was still fully intact and even extensive. At that time it was already foreseen that a floor would be built on the school and the installation was explained in such a way that the capacity would also be sufficient for the expansion. Well, three classrooms have been added and equipped with radiators. The school now also serves as a sort of village house. Meetings are organized and there are even television evenings for the villagers !! Nice to see that thanks to the work of the Foundation and the many gifts, people really enjoy the facilities.