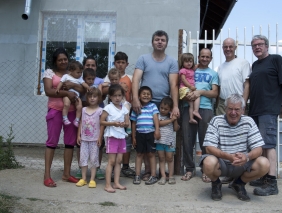 Bencec is a village about 24 km north-east of the city of Timisoara and actually consists of two villages: Bencecu de Jos and Bencecu de Sus. The activities of this project take place in Bececu de Jos. Bencec is a village with two faces, the villagers who live in normal village houses and some villagers (Romas, half-Romas), who live on the outskirts of the village in small self-built huts made of boards, pallets, plastic, etc. These people are tolerated in the village but are deprived of any normal resident facility: no paved road, no electricity, no mains water, etc. The living conditions in these huts are abysmal, especially as the huts are occupied by too many people in the one-room space . One of the biggest problems in the village is unemployment. However, unemployment is practically 100% among the slum dwellers.

These people are also not eligible for a job if work is offered, for example, people are asked for at least 8 classes of primary school education, but usually MBO education. In addition to unemployment and housing, the educational problem also plays a role for the children in these slum dwellings. Many children do not or very irregularly go to primary school, resulting in illiteracy or very minimal education, which, among other things, has consequences for finding work later. Furthermore, there is a general educational problem in this village. Due to the current austerity measures, education in the village school is far below par. This is due to the quality of the teachers. In such rural villages, hardly anyone wants to work as a teacher. Teaching staff are also very poorly paid and have little motivation. Most of them have a side job to survive, often at the expense of working in the classroom. Children in class 6 hardly reach the level of a normal class 4.

The run-up to the project.

The Aid to Romania Foundation in Doetinchem has been sponsoring the children's home Speranteï in Timisoara for 10 years. This children's home is run by the couple Gusti and Flori Luga. Gusti Luga is a pastor in the Baptist church and leads the Baptist church in the village of Giarmata, near Bencec. Through these churchgoers, the situation in Bencec came to his attention and he decided to try to do something about it. In collaboration with, among others, the Stiftung Hilfe für Kinder (Essen / Timisoara), a plan was drawn up for a route that has also shown to work well in other places: - Offer the children who should go to school an afternoon meal, followed by homework assistance and some sports and games, on condition that they attend (primary) school. (The system in Romania is education from 08:00 to 12:00 and then do homework at home) - You will then come into contact with the parents through the children and in many cases you can exert some influence on the improvement of an often hopeless situation

The implementation of the project.

An Irish sponsor bought an old house in the village of Bencec in 2009 to carry out this project. This house has been renovated and childcare is being realized there. The villagers can also go here for administrative support (most slum dwellers are illiterate) and are periodically held by a doctor for medical problems and a dentist for dental problems. The intention is that in the future the home will function as a kind of social center, a place where all villagers can go with their problems. Church services are also held.

The Stiftung Hilfe für Kinder has also tackled some problems in the village: - some wells have been dug in the shacks, and - the slum dwellers can under certain conditions receive help in refurbishing their slum dwelling. The conditions include: - the work must be carried out by the resident himself, possibly together with neighbors and - no money is made available but building material to improve the owner-occupied hom

The house in question consists of two parts: the old existing house and a new extension to the house. However, the new extension was not yet finished. In October 2011, a group of volunteers from Doetinchem made some necessary repairs and adjustments to the home: a roof on the new extension, interior paintwork and installing lighting in the existing old house. During this work, however, a major problem was found that jeopardizes the progress of the project: The entire building has a basement, but faulty rainwater drainage has caused the foundation, bricked with loam, to subside and the basement arch to collapse. This makes the whole house unstable and will have to be demolished and rebuilt with a good foundation. Currently, the cellar arch is supported by wooden posts, but the whole is too unreliable for activities in this home with, among others, the children.

The problems with the basement under the existing house cannot be solved. The new extension has been refurbished for the temporary care of the children and a new construction of the shelter has been chosen. An action has been launched to find sponsors. The Luga couple has found a sponsor for the structural work of a completely new building, in which there will be space for childcare, educational activities, crisis care, possibility for sessions of doctor / dentist / legal consultation, etc., in short, a social center in the village. At the end of 2012, partial demolition of the existing building and preparations for the new construction of the new home started with the help of the local population. The state of affairs at the end of 2013 is that the carcass is finished, the new building is wind and watertight. Sponsors were also found from Doetinchem for: - The complete electrical installation (Stork Doetinchem and Van Egmond Doetinchem) - New roof plates (Wopereis Stallenbouw Doetinchem) - Construction tools (Stork / 2-Rent Groningen) - 23 interior doors with steel frames (Svedex Varsseveld) - Water supply (Ds van Dijkstichting Doetinchem) - 6 toilet groups (Bathroom benefit store Doetinchem and Tile and sanitary warehouse Zevenaar) - Floor covering (vdWoude Doetinchem) - Partial furniture (Diakonie PGD Doetinchem)

In October, 8 volunteers from Doetinchem traveled to Bencec at their own expense and spent 10 days working on this project. They have installed the electrical installation and the water pipe.

There is no plan for the final heating installation yet. It is not yet known how best to heat this building. A combination of solar panels with a wood-fired heating installation has been considered. However, there is currently no knowledge in-house to make an informed decision about this and the money is not available to hire a heating specialist. The volunteer group from Doetinchem has indicated that they would like to return to Bencec to install a possible heating installation. Thanks to the collaboration with the Warmte voor de Kinder foundation, there is now a prospect to realize the heating installation. Attempts are being made to supply the radiators from the Netherlands via a sponsor. The other materials, including the boiler, are likely to be supplied by Rensa's Romanian sister wholesaler, Unipre

The ultimate goal of the project.

At least for the next 10 years: - Childcare with meals and educational support - Retraining of regular students - Crisis care for problems cases - Point of contact for villagers with administrative / legal problems - Basis for medical and dental treatment days

The results so far: - The people who live in the slums are very interested in (with support) refurbishing the slums - Working / collaborating on this refurbishment project results in less alcohol abuse and the realization that self-employment can result in better living conditions - Since the functioning of the childcare and the help with homework, the learning results of both the children from the slums and the children of the normal village have improved measurably - The results of the childcare (food, clothing, learning results, perception of the children) has a positive effect on the parents: sending children to school, better care of household and children, self-reliance (vegetable garden, refurbishing / maintenance of the house)

We try to help as much as possible with the further completion of the construction project, the realization of the interior and the support of the activities in this social center. Our help will consist of financial support, supply of material and goods and advice. Also, where possible, perhaps again a working week with volunteers.

The village of Bencec de Jos has a normal Romanian ribbon development along the village street, along the edge of the village self-built accommodations, usually 1 living space for cooking, heating, living and sleeping.

The Aid to Romania Doetinchem Foundation.

The Aid to Romania Foundation in Doetinchem has been working on projects in Romania for 21 years. The foundation has ANBI status and works on all projects with the local Stiftung Hilfe für Kinder in Timisoara. One of the projects that has been supported for years is the children's home Speranteï in Timisoara. Orphans and half-orphans are cared for in this home. These are children who are put on the street by the parents because there is no chance to support the children. 18 children aged 6 to 18 live in this home. The oldest children study in Timisoara. The management of this home, Gusti and Flori Luga are also working on the project in Bencec. The oldest boys and girls from the children's home Speranteï help with homework help in Bencec.

These foundation are registered in Essen. The foundation was established as part of an aid project by the German state of Nord Rhein Westfahlen. This project (training of nurses and youth carers) ran from 1990 to 2008. The Hilfe für Kinder foundation also ran this project to improve the living conditions of children in children's homes. After the end of the training project, the Hilfe für Kinder Foundation continued its work in Romania under the supervision of Ms M. Gollnick, wife of the director of the Nord Rhein Westfahlen project. She has lived and worked in Timisoara since 1991 and was appointed honorary citizen of Timisoara in 2009. The Aid to Romania Foundation from Doetinchem works closely with Ms Gollnick. The Aid to Romania Foundation only works on projects in collaboration with. the Stiftung Hilfe für Kinder.