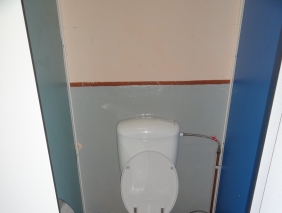 In the period from September 20 to September 28, 2014, the Help Romania foundation in the village of Valea Stejarului will realize a project with sanitary and heating with the help of the Warmte voor de Kinder foundation.

Valea Stejarului is located about 10 kilometers from Sigethu Marmatiei. At the school where this project is realized, between 50 and 60 students are enrolled, varying between the ages of 4 and 12. There is no water and / or sewage there. The people of Hulp Romania are going to pump water with a pressurized water system and a septic tank is being made. They are supposed to make 4 toilets. The toilets should be in an area of ​​approximately 4x4 meters. This space is now used as an office and the plan is to split the space into 2 parts. One room remains in use as an office and the other (2x4) the toilets are made.

Due to the harsh winters in Romania, it is not an option to install sanitary facilities in an area that is not heated. Currently there is a terracotta stove in this room. The intention is to move the stove, so that the stove should heat both rooms. We will therefore also have to bear the costs of travel (probably between 500 and 800 euros). Due to the cooperation with the Warmte voor de Kinder foundation, there may also be another solution, namely providing the building with central heating. The entire building consists of 2 large rooms, each with its own stove and a large central hall. It would be possible to place a centrally fired central heating boiler in this hall, which can heat 4 rooms. As a result, the costs would be a lot higher, but the solution is a lot better.

The people of the Help Romania foundation, mainly consisting of police officers from the Doetinchem region, have responded very enthusiastically to a possible collaboration with the Warmte voor de Kinder foundation. Partly due to this enthusiasm, we are now working hard on improving their website.